Note: This entry was proofread by Grammarly, an online correction tool I was asked to try out. Being somewhat arrogant I thought, "Pshaw! Me make mistakes?" Pasting this review into the corrector told me that mistakes indeed I do make. While I like being playful and forming odd sentences, and I consciously use sentence fragments and the passive voice, sadly, even after proofreading the text with mine own alert eyes, there were some basic grammatical errors. For instance, I conjugated "A pair" as though it were plural, left out an important apostrophe and employed repetitive wording. My greatest fail was not one but two misused pronouns, and I even managed to pull off a confusing modifier. I admit I did have fun using the tool and will continue for a little while, until my 30-day free trial expires. It is not a tool I would pay for, especially since the errors were (thankfully for my ego) few, especially at the asking price. Note that I was compensated for the one sentence blurb at the top with an Amazon gift certificate, but the paragraph below the blurb is entirely my own. 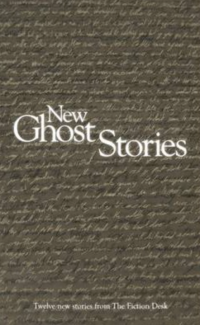 Featuring the winners of recent The Fiction Desk ghost story competition, editor Rob Redman explains in his introduction that the issue became devoted to the sub-genre as a result of receiving many strong competition entries. A superb decision, I think, as the sixth The Fiction Desk is among the strongest of the anthologies, and an occasional themed issue, in light of the consistently good stories in this one, would certainly be welcome.

We have seen ghosts wandering the pages of The Fiction Desk, so the themed issue is an extension of a part of itself, rather than a complete overhaul of its standards. In fact, the journal has published stories from most genres and can likely pull off a good collection from many. Ghost stories, however, are particular in transcending genre: while they are in their strict sense fantasies, ghosts can exist as horror, drama, satire and even strict comedy. Ghosts have haunted the pages of our most notable and recognizable serious literary personas, such as William Shakespeare, Charles Dickens, Oscar Wilde and Virginia Woolf, yet critics of the twentieth century, while admiring tales of fantasy, quickly relegate contemporary ghosts to a sub-genre, and most often dismissing such tales. Rob Redman and the team over at The Fiction Desk, along with the authors bravely risking credibility and submitting their ghostly tales to the journal, have succeeded in putting together a volume that transcends genre. These stories are not about ghosts per se, yet like any great collection of serious fiction, are about so many concrete and versatile topics, yet happen to feature varying concepts of ghost.

The only story that did not grip me is Linda Brucesmith's "The 25th Caprice," despite some good ideas. Recipient of first place is Joanne Rush's "Guests," and is very much deserving of the prize. Second place is Julie Patt's "At Glenn Dale," and while a strong story, my personal runner-up is Miha Mazzini's effective "In the Walls."


At Glenn Dale by Julie Patt     7/10
A pair of feuding high school boys settles on a showdown at the abandoned and haunted sanitarium in the town of Bowie. Ghosts and varying asylums go well together, yet "At Glenn Dale" proves to be a study of character and place in the guise of a ghost tale. The collective narrator (a la Faulkner's "A Rose for Emily") helps elevate the tale to town myth, and since that collective voice is authoritatively familiar with the details of the showdown, I wonder if the narrative belongs to the ghosts themselves. The story received second place in the competition.


Journeyman by Eloise Shepherd     7/10
A run-down boxer living with his two sons grows increasingly anxious as there appears to be a ghost in their home. Some fine ambiguity and good focus on character make for a fine read, and the story is especially elevated by genuine creepiness.


Tom by Oli Hadfield     7/10
Twelve year-old Tom is being bullied at school and neglected by a mother who is focused solely on getting back father. His only comfort is friend Becky and a spirit'like presence that guides him along. A good vision of youthful harassment and familial neglect, I feel genuine sympathy for Tom and like that the narrator's identity and existence remains unexplained. Ghost is perhaps a less appropriate term since the voice can be from a boy forced to see the world outside of a shameful self.


Washout by Matthew Licht     5/10
A struggling pair of roommates head out to scavenge for a working washing machine and encounter death and a ghost in a run-down part of New York. While I liked the premise of a pair of scavenging men (I too have scavenged successfully in my younger days), I did not get immersed in the narrative voice nor the series of events. Licht's other two Fiction Desk contributions were better efforts: "Dave Tough's Luck" in Various Authors and "Across the Kinderhook" in Crying Just Like Anybody.


Half Mom by Jason Atkinson     6/10
Clara receives from her father an urn containing half of her mother's ashes (the other half are still with father). Father's plan is to force Clara to decide what they should do with the ashes, mother having died six years ago. Another good story from Atkinson, the author of two previous Fiction Desk entries, both strong stories: "Get on Green" from All These Little Words and "Assassination Scene" from Various Authors.


No Good Deeds by Amanda Mason     7/10
After helping an old lady with her trolley, a lonely woman begins to see and smell her everywhere she goes. Recovering from a severe head injury, she does not believe anyone would believe her, and must suffer her ghost in silence. A strong story in which, in many ways, our narrator is herself a ghost; unseen and existing rather than living. Though the old woman is a creepy nuisance, it is through her that our narrator can begin to come to terms with her trauma.


Chalklands by Richard Smyth     6/10
A more traditional story of a returning spirit, this one deals with family and reminds us we can never know everything about those we love the most. A tragedy for this family might not, in its own mysterious way, be as tragic for the victim, and we can't expect resolutions when dealing with family dynamics. Smyth is also the author of the title story in Crying Just Like Anybody.


Old Ghosts by Ann Wahlman     7/10
Two years after the death of her beloved husband, a woman reunites with him every night in bed. While the woman's mother and friends encourage her to move on, she can think only of heading home and being with her husband's spirit. Things get complicated when she meets someone. A strong, emotional story with an effective conclusion. The story does not explore whether the husband is a ghost or a figment of grief, but rather the idea of transitioning to another chapter in one's life and the terror in the prospect. A great ambiguous ending, leaving the reader with a vivid image.


The 25th Caprice by Linda Brucesmith     5/10
The devilish ghost of past master Paganini haunts current master violinist Pesha. A take on the classic notion of outsmarting the devil, the story features some fascinating details borrowed from Paganini's life, yet the plot is a little flat. And I for one couldn't help but think of that Charlie Daniels Band song "The Devil Went Down to Georgia."


A Whole Bloody Century by Jonathan Pinnock     6/10
A mourning man is at the church when he encounters a tramp muttering about a whole bloody century. Mourning for loved ones, as Poe has famously stressed, makes us wonder about secret everlasting life. Though there are no real surprises here, I liked this story, primarily for its straightforward narrator and that unfathomable idea of a whole bloody century.


In the Walls by Miha Mazzini     8/10
A successful businessman at a holiday party goes home with a woman and spend much of the night listening to the sounds of a sickly coughing child. An excellent story in its focus on character, its tight prose and genuine creepiness. Interestingly it is not the nature of the ghost that is compelling in this tale, but rather that of the narrator. There is an effective irony in a man being so isolated and distant from his family while being the potential conduit in reuniting a mother and child.


Guests by Joanne Rush     8/10
A freelance web developer is left alone when her husband heads to Bosnia on a secretive mission. Keeping to herself in their isolated home, a series of dead from the former Yugoslavia settle in her home. She soon begins to neglect her work as she becomes acquainted with the various ghosts, immersed in their stories, their histories. A story worthy of receiving its first-place award, "Guests" runs the gamut of emotions, from historical tragedy, mystery and even humour. In fact, the story is so immersive and its characters so concrete, that we forget it's centred around ghosts.