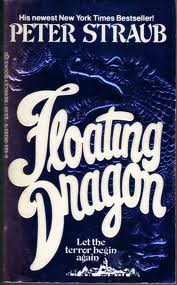 
The populace of affluent Hampstead, Connecticut, and its outlying regions are unknowingly facing the fallout of leaked bioweapon DRG-16. Simultaneously a generation-dormant supernatural evil awakens to claim vengeance on the descendants of four families that had defeated its previous incarnations. This unusual mix of mad science and outright supernatural horror is a rare combination, and Straub's attempt is a worthwhile read. Admittedly there is at times a lack of balance between the two elements, with the supernatural kidnapping the reigns throughout the better portion of the latter parts of the novel, while I was hoping DRG-16 would interact more directly with the supernatural. Straub does attempt to meld the two with characters considering the possibility that the supernatural exists only their virus-affected minds, a great notion which he does not build upon beyond some brief discussion. While this would have been an excellent additional element to complicate the narrative, even eliminating some of the nightmarish visions in order to maintain its current length, I do understand that readers would be invested in the supernatural and this would only be a distraction; few would be caught up in this additional mystery, unless Straub set it up at the start of the novel.

The novel's build-up, or complication if we were to turn to Aristotle, is superbly presented. A layered narrative involving various styles, approaches and innumerable characters is solidly constructed. The town is delineated to such a point of clarity that I feel I can make my way through its streets, and the people are so invested in, though of course a fair share of stereotypes are included in their number, that like the town we see them clearly and never really lose track of even the minor players. The novel incorporates an incredible number of sub-genre elements, including serial killers, hallucinogenic experimental drugs, telepathy, doorway mirrors, walking dead, suicidal pets, a haunted house and a big bad monster. These items do not stray, since most are linked to either to our vengeful dragon or DRG-16. Some are hallucinations rendered by one of these evils, and Straub, for the first half of the novel at least, manages to balance each element well. Only when the book delves deeper into its hallucinatory faze do I feel his grasp has slipped.

The two elements that weaken the novel are the over-utilized visionary sequences and the elongated climax. Mid-way through the novel, as I was wholly immersed and speeding along, Straub shifts gears and guides us into a traffic jam of fire-bats, walking dead and beached corpses. The supernatural dragon is evoking hallucinations for our four heroes, and this overly-long section contains serious faults. Not only is it overly-long and repetitive in scope, it is unclear why the dragon, knowing who the family descendants are, did not attempt to defeat the four before they managed to unite. Was the dragon not yet strong enough? He seemed strong enough to at least attempt it, since his enemies too were unprepared at that time. This was the dragon's moment of defeat.

Overall I found myself more interested in the many sub-sequences littered throughout the novel. Leo Friedgood's descent into sexual depravity; the Norman brothers bullying Tabby while catering like puppies to a career thief; hack reporter Sarah's attempts to uncover the odd goings-on in the region; Richard Allbee's reminiscences on a 1950s television sitcom set; Clarke Smithfield's escape from his father; and so forth. The dragon distracted from these many interesting moments, and other than his incarnation as Bates Krell, he never manages to generate the tensions we encounter with real people. I suppose the supernatural is so fabricated that we are more invested in the real tensions devoted to the many characters.

Another element I enjoyed were Straub's post-modern touches, the notion that this novel is a creation of one of its characters, fictionalizing the actual events. If only Graham Williams was able to edit himself when describing those hallucinatory attacks, and that long climactic sequence. The singing, in this context, is perhaps a touch of modern absurdism, but even then a little silly.

Stephen King's more popular IT (1986) is similar to Floating Dragon in several aspects: from the notion that a group of close-knit friends mus battle some unseen evil that kills off townsfolk over different generations, down to the sexualization of the group's only female member. While King's novel holds up better at the finish line, Straub has a tighter build-up and proves, at least technically, to be somewhat superior. Perhaps Floating Dragon should have been a pre-The Talisman collaborative effort. 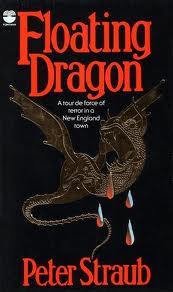 There is also a strong similarity between Floating Dragon and the recently reviewed Castle of Otranto (1764): both novels feature a vengeful spirit bent on destroying the descendants of a former enemy. Between the two we can see either side of a coin: whereas the family in Otranto is the antagonist and the spirit seeking proper justice, Straub's novel features a malevolent spirit, as is more common in horror .

As a final note I wanted to approach the novel through Robin Wood's idea that the monster in horror fiction (though he was referring to film) is an outsider, a creature marginalized from society's norm. In Floating Dragon our four heroes are themselves far from the norm: two are telepathic, one can foresee while the other can back-see (like Prometheus and brother Epimethius). If we were to apply the theory (more complicated than how I am presenting it here) along with the monster's relationship with the protagonists, perhaps this isn't a horror novel at all.

Posted by Casual Debris at 2:00 AM

I remember when this came out, but not if I read it.

By the way, we seem to have the "floating" alphabet covered, I did the Floating Admiral today.

Maybe we can begin suggesting title words as a possible challenge. There must be other "floating" books out there.