One Step Beyond was an anthology 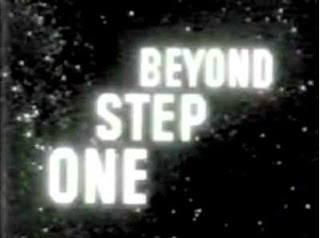 series that ran from January 1959 to July 1961. I had never heard of it before finding a copy of the first season DVD at my library, and since I like anthology series I immediately snatched it up.

Anthology series were popular throughout the 1950s, and One Step Beyond was one of a number that tried to blend a fantastical element with its dramatic story-telling. The show was not a copy of popular The Twilight Zone; in fact its first episode aired seven months before the latter's seminal, groundbreaking pilot "Where Is Everybody?" Instead of science fiction, horror or mystery, it utilized "factual" paranormal events to present its drama. It was quite successful, running for three seasons, quite a feat when most shows of its kind did not survive even one. The show lacked the originality and breadth of The Twilight Zone, featuring fairly traditional ideas and presenting them in a straightforward, conventional manner. What rescued many of its episodes was the show's often character-based drama, almost as though it were modelled after The Naked City (without its consistently excellent cast). Unfortunately, One Step Beyond was often predictable and uninteresting, though it did feature a small number of strong dramatic episodes. Of the first season's twenty-one episodes, I liked nine, but thought only five were well above average: "Emergency Only" (episode #3), "The Dead Part of the House" (#9), "The Devil's Laughter" (#11), "The Navigator" (13) and "Echo" (#20).


As with The Twilight Zone and the 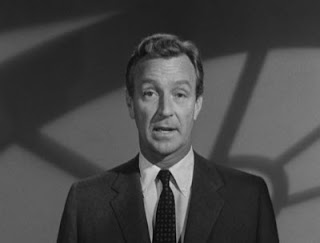 legendary Alfred Hitchcock Presents, each episode of One Step Beyond was bookended with an audience directed introduction & epilogue. Its host was the show's director, a serious though likable John Newland. Though a little too serious at first, the opening season experienced a noticeable change as the introductions became increasingly lighter in tone. Though Newland did not openly commit to believing in any of the paranormal elements presented in the show, he was so knowingly suggestive with his slight shrugs and active eyebrows that he might as well have claimed the events happened to him. After a handful of episodes he became a little playful, smiling at the audience and even having some fun, as in the Charles Beaumont scripted "The Captain's Guests" (episode #18) where he walked up the steps of the haunted house amid creepy sounds, looking quite worried at what might lie around the bend or behind the next door. Unlike the distant and often intense Rod Serling, Newland appeared friendly and neighbourly, the kind of guy you might trust as a guide into the unknown. Though unlike Alfred Hitchcock's humourous parodies and nonsensical monologues, Newland's introductions were (often overly) serious presentations of the episode's specific paranormal event. Moreover, unlike both Serling and Hitchcock, Newland was unfortunately faced with some poor writing, and forced to actually utter the nonsensical line, "Explain it we can't, but it has been reported as true by those to whom it happened." Talk about empirical evidence. Whether or not Newland was selected as the show's host for his affability or simply to cut costs (he was the show's prime director) I do not know; an interview with Newland I recently read did not address this point, mentioning only that he was the producers' choice prior to selling the idea.

The episodes themselves were a little all over the place. Those that succeeded were the ones with a good cast and script, that managed to mold the paranormal with the character-based drama. Many of the episodes dealt with serious human situations, such as "Epilogue" which dealt with a recovering alcoholic (Charles Aidman) trying to regain his family, and "The Dead Part of the House," featuring a man (Philip Abbott) and his daughter moving in with his sister (Joanne Linville) following the sudden death of his wife. These episodes were interesting and dramatic independent of their paranormal element, and the supernatural was well interwoven. While "Epilogue" was predictable and its fantastical element a little silly, the possible ghosts in "The Dead Part of the House" were integral to the family dynamics and the episode concluded very nicely, even warmly. Another favourite is "The Navigator" (episode #13) which was set on a ship and featured a heated relationship between a forgetful aging sea captain and his youthful first mate who was sent from the company specifically to write a report on the captain's mental health. The men discover that someone had written incorrect co-ordinates that sent the ship off-course into dangerous icy territory, which sets off a tense investigation almost reminiscent of The Caine Mutiny. The character dynamics made for a strong dramatic presentation though the supernatural element became predictable in the last five minutes. Unfortunately the actor playing the first mate, Don Dubbis (who actually had an uncredited role in The Caine Mutiny), looked the part very well but was a little lopsided in his performance.

Among sillier episodes are "The Dream," "The Return of Mitchell Campion," "The Aerialist" (which features some horrible Italian accents) and "The Front Runner." Not only were these chapters predictable, but were stuffed with filler to bide time until we reached that ending. "The Devil's Laughter" (episode #11) on the other hand, had an uninteresting twist but was so well scripted and fantastically acted by little known New York character actor Alfred Ryder that it is worth a re-watch. The surprisingly good and well acted episode (though you can tell the actor playing the bartender never poured a drink in his life) "Echo," is marred when the protagonist (Ross Martin) witnesses the ghostly image of a gunman in his hotel mirror. Though the gunman is supposed to be an illusion, the effect is so poorly filmed that the actor's shadow appears on the wall beside and beneath the mirror, and as he shoots the sparks and gunsmoke are clearly visible in the bottom right-hand corner of the screen. This completely breaks the illusion of a tense moment that while a frightened Ross Martin sat bathed in sweat, I was actually bathing in laughter.

It is clear why this show did not become as recognizable to later audiences as The Twilight Zone or Alfred Hitchcock Presents: it lacked the creativity, originality and consistent strong cast. Production values were quite strong ($30,000 to $50,000 an episode), though the incredibly vivid images on the CBS/Paramount DVD are no doubt far superior than those broadcast through a 1959 TV screen. Like its two more popular rivals, One Step Beyond also had a revival series. It was titled The Next Step Beyond and continued to feature host Newland, but it did not catch on and could not survive its maiden 1978-79 season. Newland himself had a long and successful television career as actor, producer and mainly director, including episodes of Alfred Hitchcock Presents, Thriller, Route 66, Wonder Woman and the Star Trek episode "Errand of Mercy" which introduced us to the Klingons, as well as the successful and acclaimed 1973 TV movie Don't Be Afraid of the Dark. Despite these successes he is barely remembered today, and known primarily as host of this very average television drama.

Aside from a very few episodes I would not recommend this show to the general public, though it is unfortunate that those few strong and well written episodes are forgotten since the rest of the show was quite mediocre. There is a Best of... DVD available, and in the case of One Step Beyond I think it is quite appropriate.

Posted by Casual Debris at 7:44 PM

Email ThisBlogThis!Share to TwitterShare to FacebookShare to Pinterest
Casual Labels: anthologies TV, One Step Beyond