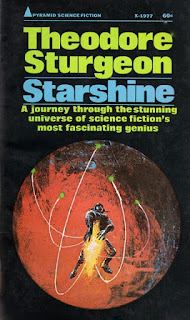 At the time of publication, many prolific genre short story writers were having small paperback collections published regularly. Since producing these thin paperbacks at the time was an inexpensive exercise, allowing the books to be sold cheaply, publishers released as many titles as possible (or as seemed reasonable). Often stories were reprinted several times across different collections, so that some of these collections mirrored each other by more than half their content (Brian Aldiss immediately comes to mind). In the case of Sturgeon (and others of course), once the popular stories saw print, publishers pillaged the pulps for the less interesting pieces, in order to continue releasing collections under these popular names. Therefore, the latter books during this run tended to be generally weaker.

Sturgeon's Starshine was his fourteenth collection, and the sixth published in English in the 1960s. Half the content was published in the early 1940s, and only one was published in the 1960s (in 1961), which was a straighforward  and fairly standard mystery. Slim in size and content, it contains only six stories, including three novelettes, which is unfortunate since weaker stories in a longer format are more painful to plod through than a bad short short. The collection is not terrible, merely average, and the only strong story, "The World Well Lost," had already been included in Sturgeon's respected second collection, from 1953, E Pluribus Unicorn.


"Derm Fool"     6/10
Unknown Fantasy Fiction, March 1940. pp 114-124
A taxidermist continuously sheds his body parts. A combination of body horror, science and comedy, that works surprisingly well as a quick, though forgettable read. The story lacks subtlety and features familiar comedic character types. An amusing read, sure, but not worth re-visiting.


The Haunt     5/10
Unknown Fantasy Fiction, April 1941. pp 106-117
A young man is in love with a seemingly mean-spirited, lively and tough young woman, and is frustrated at not being able to get through her protective shell. He recruits a friend to rig an old house so that it appears haunted, with the hope that by rescuing her she will fall for him. Predictable and less than original, what saves this story is its light tone and playfulness, which makes for a speedy read. For something like this, however, I need to be in the mood, since a comical genre piece can be infuriating if it's not what I'm hankering for.

Similar in tone and character relationships to "Derm Fool." Both stories feature a clever young man wooing a clever and hard-headed young woman, with a third character who is male, entirely comical and unappealing, who acts as a foil to progress the plot. "The Haunt" is far less original, however, and while the tone is amusing, the writing lacks the attention to detail of the preceding story.


Artnan Process     5/10
Astounding Science-Fiction, June 1941. pp 50-68
Here we go... A few centuries in the future, five hundred years following humanity's excursion to the stars, Earth finds itself in passive submission to Mars. Relying heavily on Martian uranium, the people of the red planet have slowly gained quiet rule, by providing Earth with the power source and making suggestions as to how we live, what we read, etc. Humans who do not uphold those suggestions are killed, but of course that does not keep the good people of Earth from developing an underground rebellion. At the same time, an extra-solar system race, the Artnans, have developed a way to cheaply produce the same type of required uranium, which they send to Mars in exchange for other materials. Two humans are sent to the Artnan world where they encounter three Martians, and the two races try to outwit each other in becoming the first to discover the Artnan process of developing the valuable uranium.

Part space opera and part hard sci-fi, the story is fairly interesting but much of it is quite dated, from the comical representation of the Martians to the technology and character relationships of our human men. Yes, men, since no woman is even referenced in this novelette. Part of me thinks the story is too long for what it is, but since my synopsis itself is lengthier than my commentary here, I shouldn't judge. Overall not bad, but also not good.

"Why must we love where the lightning strikes, and not where we choose."

In the distant future, Earth encounters the planet Dirbanu. Its people are protective, and the planet is shielded so that no one is able to gain access. Even farther in the future, Earth is visited by two aliens, and soon afterwards the planet Dirbanu, now a distant memory, sends a communication to Earth. They are requesting the return of the two visitors, who are criminal refugees. Earth sends a prison ship to Dirbanu, manned by two men, Rootes and Grunty.

So much detail for what becomes a satisfying story of prejudice. Where this story ends is unexpected (to me, at least), and in a good way. It is difficult to discuss its objective without giving anything away. By far the strongest story in the collection. Impressive also that this was published in 1953.

On the cover of the issue of Universe Science Fiction, where it originally appeared, there is a claim that this is "Theodore Sturgeon's most daring story."


The Pod and the Barrier     6/10
Galaxy Science Fiction, September 1957 (as "The Pod in the Barrier"). pp 8-48
In the distant future (yet again), a helpful race called the Luanae have guided humans to terrestrial planets where they can continue to survive and expand their race. Now, with Earth dying, they have directed humanity to a set of habitable planets, but to reach those potential new homes, humans must penetrate "the barrier."

A ship reaches the barrier on a potential suicide mission. A group of four experts in different fields, along with the ship's small crew, must test the barrier in the hope of finding a way through, or of dismantling it. The story is told through the point of view of one of the experts, an arrogant tough guy who learns to his disgruntled dismay that he is perhaps not the cleverest person aboard.

The best part of the story is the description of the Luanae and the history of the barrier. Otherwise the story is quite weak. The narrator does not work as he is not sympathetic, which resulted in his self-discovery coming across as irritating since it intruded on plot progression. The story development is slow, and the plot itself, though it is interesting and takes on an unexpected direction, is just not as interesting as the premise, so that the story descends from premise onward. The story may have worked better in the third person, or through a more objective or serious point of view; the occasional light tones for an uneven narrative and the humour is flat.


How to Kill Aunty     6/10
Mike Shayne Mystery Magazine, March 1961 (as "How to Kill Your Aunty")
Bedridden after falling down the stairs of her home, an elderly woman suspects that her dim-witted nephew Hubert is plotting her murder. An entertaining story, though predictable. The final character revelatory moment is a good addition and does elevate the story in terms of character.

Surprisingly, this was included in Best Detective Stories of the Year (17th Annual Collection), edited by Brett Halliday, (Dutton, 1962). It would only be reprinted in a Sturgeon collection with the complete works series, nearly four decades later.

"Aunty" ran in the second and I think last of Dresser's volumes of BEST DETECTIVE STORIES, as there was some sort of tension between Frederic Dannay and Dresser, or at least between ELLERY QUEEN'S MYSTERY MAGAZINE and Dresser as licenser of his Mike Shayne character to MIKE SHAYNE MYSTERY MAGAZINE, and no EQMM stories were allowed to appear in Dresser's annual volumes...so a Not Bad Sturgeon crime story looked pretty good with nothing from EQMM available for reprint. Dresser got by with ALFRED HITCHCOCK'S MYSTERY MAGAZINE, ED MCBAIN'S MYSTERY BOOK, various slick magazines including the newspaper weekly supplement THIS WEEK, and MSMM, but I imagine everyone felt the strain. (Even THE SAINT MYSTERY MAGAZINE was on a brief hiatus for most of the time Dresser edited the annual.)

This is one of the least impressive of Sturgeon's collections, I'll have to agree. Still readable, certainly. But nearly his worst single book.

Thanks for the input on Best Detective Stories--interesting. Likely the Sturgeon story would have been included regardless, as his name helped sell books and his work did appear regularly in mystery anthologies, even his fantasy pieces. It was from the mystery anthologies I was introduced to his work as a kid, and I recall first reading "Shottle Bop" in Stories to Be Read with the Door Locked and "The Other Celia" in Stories that Go Bump in the Night.

Ah, but Random House "HITCHCOCK" anthologies were always eclectic. I finally put my hands on my copy of BEST DETECTIVE 17, and a couple of Michael Zuroy stories from MANHUNT...the already collapsing MANHUNT of 1961...help fill out from the Heavy dependence on the shortlived Pocket Books magazine ED MCBAIN'S MYSTERY BOOK (six stories out of 18 stories in the volume), five from AHMM, four from MSMM including Dresser/"Halliday"'s own story, one (the Miriam Allen de Ford--the only story by a woman!) from PLAYBOY imitator THE DUDE. Having SHAYNE represented was at least as necessary, I suspect, as having EQMM represented was for Anthony Boucher, who would begin editing with the next volume and continue till his death. (Boucher, like Dresser and the other editors, would mostly take pains to have a variety of the CF magazines represented in the annuals.)

SHAYNE was the only sustained hardboiled CF magazine after MANHUNT finally fell apart a half-decade later, but always was kind of a salvage market...never paying nearly as well as EQMM or AHMM, which were pretty comparable (even before Davis Publications bought AHMM in the mid '70s) , though I imagine MSMM outpaid the last days of MANHUNT. I haven't read this volume yet, though I have read a number of the stories, including the Sturgeon...probably should, even if for no better reason to get a good index up on the web.

ANDRAINO ADAMS said...
This comment has been removed by a blog administrator.
12 June, 2020