Robert Silverberg, The Reality Trip and Other Implausibilities 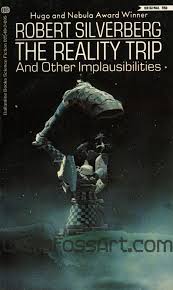 Between 1969 and about 1985, the world was subjected to the publication of a Robert Silverberg short story collection on an annual basis. Some of those years even experienced multiple collections. A prolific and fairly consistent writer, the material was plentiful, so that most stories did not need to wait long before being included in a collection; in fact, many were collected the same year they initially saw print, such as "Caliban" in this volume.

The Reality Trip and Other Implausibilities was made up primarily of a small number of new, as-yet uncollected stories, with five of the eight first appearing between 1970 and 1972. The remaining three stories include two recycled pieces from the fifties, though "The Shrines of Earth" had not yet been reprinted, and the first-time collected Hugo and Nebula nominated novella, "Hawksbill Station" (1967), which had already re-appeared as a novel, an expansion of the novella, in 1968.

Skein is a Communicator, a skilled telepath who can unite two minds with the purpose of effective communication. During a lucrative communication session, however, the connection damages his brain, and he no longer lives in a linear state, but experiences continuous flashbacks and flashforwards. Now Skein is searching for a purple planet that he has seen in his future which he believes can heal his damaged brain.

A riveting story, well structured and with a vividly created world for such a short piece. Skein is not very likable, a talented telepath who capitalizes commercially on his talent, yet Silverberg manages to reign in sympathy for this man, who undergoes a great transformation throughout his humbling experience. My favourite story in the collection.

Included in Terry Carr's The Best Science Fiction of the Year (1972).

After eleven years in New York City, studying humans and transmitting copious data daily to Homeworld, an alien visitor must fend off the attentions and advances of a neighbor, Elizabeth Cooke. Cooke is a bohemian, a pot-smoking poet who is attracted to the alien's otherness, his loneliness and social distancing. A highly entertaining story, the first person narrative focuses both on the alien's struggle to deal with the attentions of Cooke, alongside his intense loneliness. Despite the seeming contradiction, there is never in the protagonist's mind the notion that such a relationship with such a human, or any human, can make up for his extreme isolation, and in addition, despite that loneliness, he is not interested in relocating until the situation with Cooke escalates.

Though considered to be among his best short stories, "The Reality Trip" was not included in any of the "Best of" anthologies for 1970. Terry Carr only began his run as sole editor of a "Best of" series the following year (he was previously co-editor with Donald A. Wolheim), and did include "The Reality Trip" in the relatively forgettable paperback anthology, This Side of Infinity (Ace Books, September 1972).

In the year 2000, Manhattan has been taken over by African Americans, as whites have moved out to the suburbs. The story follows an angry senior high school student, James Lincoln, who prefers to go by James Shabaz, as he festers with anger over the centuries of oppression blacks were forced to face in the hands of the ruling whites, and the seeming apathy of those in his community. The story envisions a future racial peace in the US as a result of total segregation, with different minority groups taking over different areas across the country. Like most racial stories of the period, this one is  certainly dated, though it is surprisingly not a bad read. It is, however, interesting that with all this seeming social progress, black men still speak as though they lived in 1970, when you think language would evolve differently with a reduction in the influence of white culture.

Exploring the rim of the galaxy is a vessel run jointly by the military and a small group of archaeologists. These two opposing groups struggle to compromise amid differing agendas, and the tension is thick, brought to a head when they reach a planet which the archaeologists wish to explore, whereas the military believes has no value.

The story begins in the third person, though this voice is eventually revealed to be one of the five archaeologists, which is an interesting shift not often used. Since the story is primarily about two distinct social groups, each appropriately stereotyped, the lack of individual characterization makes for a good third person tale. Though names of some of the minor players are given, we are essentially dealing with two distinct groups rather than individual characters, a detail highlighted by the fact that each group's only standout character is their leader. Though the military is responsible for the larger portion of the mission's budget, the archaeologists do have some contractual weight, and essentially force the ship down onto the dead planet for a week's worth of investigation. They quickly make an incredible discovery, and do their best to conceal it from the other party, which is not interested in extraterrestrial culture, but in practical materials, either resources or weapons technology.

By far the strongest of the earlier stories, it is elevated by its original and well structured narrative form, and pays off with a tragic ending.

A man awakens in a future where physical beauty is the norm, and people can exchange their body parts and take on any appearance they wish. A world where everyone looks exactly alike. A blatant, humourous take on extreme conformity, basic body image issues and the need to fit into one's social circle. In this world, however, the other, that ugly time traveller, is accepted rather than ostracized, and while this future society attempts to mold him into one of their theirs, his difference is instead leaving an influence on the beautiful people. Certainly not original, but entertaining, particularly in light of the protagonist/narrator's self deprecation, and that breathing underwater scene. The title refers, of course, to the half-breed Caliban of William Shakespeare's The Tempest.

Following three thousand years of peace, terrans on Earth have become passive and non-confrontational, focusing primarily on the arts. Among the colonies scattered throughout the galaxy, terrans have earned the reputation of being innocent and inconsequential. Yet when the terrans learn that a group of aliens plan a takeover of Earth as part of their conquest of the galaxy, they must find a way to defend themselves. Since they are unable to use weapons, they must rely on craft. A slight story, whose initial premise immediately reveals what is to come. The bulk of the story features somewhat repetitive scenarios that lead us to the obvious conclusion, during which one of the terrans expositorily explains the already obvious crafty plan to the reader. The weakest story of the collection, and not previously reprinted.

Humans take vacations via shunting: the act of entering another person's consciousness and thereby experiencing that person's life. When a malfunction occurs, a group of consciousnesses are separated from their bodies, and technicians must link them back together, by requiring that each person enter each separated body in turn, and for the person to raise their hand once they are re-connected with their body. However, there exists the risk that a person might deceive in order to permanently take on the identity of another.

Told through a series of experiences through a single consciousness, the story appears to be more invested in relaying diverse life experiences than in dealing with its themes of risk in this kind of technology. The focus also indicates that there is perhaps only so much to discuss with this idea. The weakest of the newer stories.

In the politically rife and repressive future, those with strong opposing political views, rebels, dissidents and even philosophers, are sent to Hawksbill Station, a prison set up in the distant past. The trip to prison is a one-way affair, and lies in the Precambrian era, on a bit of land that would eventually lie underwater.

We experience this extreme penal colony through the eyes of its leader, a role earned through seniority. Vivid and detailed, with many characters and a suspenseful plot, this is an excellent novella that is tightly woven into its premise. It is odd, however, that the suspicious newcomer does not develop a better back-story when navigating through Hawksbill Station, or that he takes notes rather than leave details to memory, but these are small qualms as the story is overall fascinating and well developed.

The novella was expanded into a novel, and released by Doubleday a year after its original publication. In the UK the novel was published with the title The Anvil of Time. I will likely hunt this down at some point.

I haven't yet picked up this collection, but I've certainly read "Hawksbill Station" and the novel version...the latter was the first adult sf novel I read that wasn't already in the "classics" shelf--as opposed to H. G. Wells, Jules Verne, Butler's EREWON (more fantasy, pretty much), LOOKING BACKWARD, FRANKENSTEIN and that whole crew. Both versions left a strong impression.

I also need to pick up the McCaffery anthology, so ne way or another I'll see if I agree with you about his story there.

kaitlinkadin said...
This comment has been removed by a blog administrator.
01 March, 2022