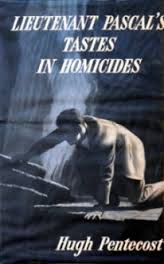 This novella highlighting diamond retail and shipping is, for the most part, a standard mystery for its period. It features so many overused tropes that the final dozen pages or so, intended to be tense, come across as comical. However, the first half of the book, the build-up or complication (to borrow Aristotle's term), is quite strong, particularly the finer details in diamond processing. The fascinating world of diamonds is a constant in fiction, and Pentecost (Judson Philips) does well in detailing the gambles inherent in processing the stone in its raw form.

The murder of elderly George Rawn in a hotel room leads Lieutenant Pascal to investigate the murderous pursuit of a package of speculative diamonds. Two suspects are conveniently found at the murder scene, one of whom, hot-headed Kelly Cotter, reveals the backstory via a written explanation requested by Pascal. We learn that Rawn and Cotter recently made a comfortable fortune on an engineering invention, and through some detailed back-backstory concerning Rawn, found themselves with a box of speculative diamonds: a parcel containing raw diamonds whose contents might amount to a fortune, or far less. Since so many people out of the woodwork are suddenly interested in that parcel, it appears something is afoot, and not only is Rawn now dead, the diamonds have gone missing.

The best part of the story is Cotter's narrative, and the best part of his narrative are the details in diamond speculation. Pentecost likely framed the story around those facts, but the story itself falls into the mould of convention. Interestingly, the bulk of the story is not carried by Pascal,though the narrative does open with him, but instead we pursue Cotter in his hot-headed need to uncover the identity of Rawn's killer, tossing out as many accusations as there are suspects. Add in a love story between Cotter and diamond dealer Carla Van Rooten, some sentimental details concerning Rawn, and a mysterious diamond hunter, and you have a somewhat entertaining, standard detective story.

It is interesting that Lieutenant Pascal is merely a bit player, despite being the lead investigator. Though it is Cotter who discovers the murderer and binds, though almost accidentally, the strings together, the mystery of the diamonds' whereabouts is left to the deductive mind of Pascal. This is the note the story ends on, so that the narrative, despite being driven by Cotter, is framed by Pascal.

Pentecost wrote a small number of stories featuring Lieutenant Pascal, and in this one he is merely on the periphery of the story, which is odd as it does nothing to help further develop the character. I can only deduce that he was likely not among Pentecost's favourite creations.