The Underpainter at Goodreads 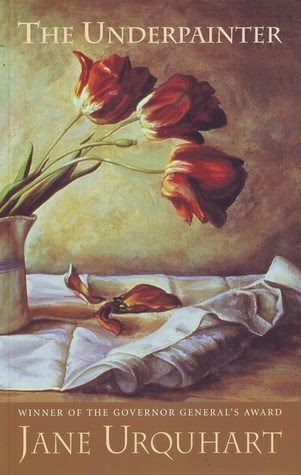 Like many a modern painting, The Underpainter grew on me steadily. At first I was a little disinterested, dulled by the cold, distant narrator, Austin Fraser. Though I did like the few early scenes featuring Fraser's friend George and some other supporting characters, it wasn't until after a hundred pages, when Augusta was telling her wintry tale of youth, play and the cold winter farm, that I became wrapped up in a cloak of interest.

Urquhart's excellent prose helped, but I was more fascinated by the ideas behind the tale, and by the fact that we were in the head of an easily dis-likable character. The Underpainter is Urquhart's fifth novel, book-ended between her two most successful works: Away (1993) and The Stone Carvers (2001). Though I haven't read any of her other books, I understand there was concern in her tackling a male first person narrator, and an American; the work might as well have been written by an American male.

Contrasting elements co-exist in Austin Fraser's art and life. Fraser believes that every aspect of his life must exist for and contribute to his art, and at the same time, thanks to the influence of the charming Rockwell Kent, he believes that every aspect of one's self must be invested in life, and the results should then be captured in art. Fraser is unable to invest in life as he is a reclusive, self-interested person, and hence what he captures in his art is controlled, whether a scene or a landscape, lacking spontaneity and "life." Moreover, the technique of underpaiting is his final attempt to mask that interpreted reality from the world. Not only is Fraser shut out from the world and people, his art is just as distanced.

Fraser is comfortable in an ordered landscape. He attempts to control the world and the people around him, possibly to create a scene in life that he can then transpose onto canvas. Like his paintings, hints of good peak out from the layers of selfishness. His love for his friend George is genuine; he is merely unable to understand the man, just as he is unable to understand any of the players in his life, which make it impossible for him control his environment, and hence impossible to control his art.

Fraser is summed up by Augusta, a former war-time nurse and the most interesting character in the book: ""Though so much of everything," she said, "is unexpected, Isn't it? Accidental--even if it's hard to believe that. Still, it's almost impossible to believe the opposite--that everything is planned." (p. 290) Moreover, he is a reflection of the man-shaped peninsula, The Sleeping Giant that bookends the novel: "Behind her the stone man slept on, unmoved by her journey, his body hard and rigid and unchanging. // Heart of granite. Bed of ice." (p. 333)

What is most interesting to consider in Urquhart's narrative technique is Fraser's purpose in setting down his story. It is difficult to accept that this narrative is a recollection of Fraser's, a memoir of his life, as he lacks the sentimental nature and the sensitivity to construct such an emotionally wrought narrative. Instinctively we approach the text with the belief that Fraser is less than a trustworthy narrator, and yet he is honest with his own deficiencies, and we accept that he presents his story without, in a sense, underpainting it. Perhaps there are hidden elements in his bringing an old acquaintance back to Ontario, but this is speculation. All this leads me to wonder if he is not a better writer than he is an artist, and maybe he should have replaced his brushes for the inkwell he receives from George early on.

Whatever Fraser's true calling, Urquhart masters the craft of writing in this somewhat conceptual novel, difficult to render and well accomplished.

Posted by Casual Debris at 9:08 AM