Because of What Happened: Stories from The Fiction Desk 5

Because of What Happened at Goodreads
The Fiction Desk website 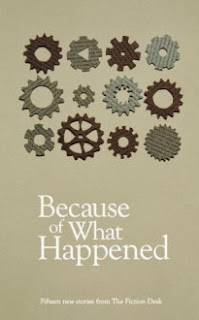 The latest issue of The Fiction Desk features fifteen stories compressed into 136 pages. No, the font is not shrunken as my opening sentence seems to imply, but instead volume five contains short short stories, including the winner and finalists of their recent flash fiction contest. Not a fan of flash fiction, I was hoping some long pieces would have been included to balance out the issue. Balance, however, turned out not to be a problem, though I find that overall the fifth TFD is so far the weakest. There are no bad stories by any means included, but the consistently strong stories I am now used to are replaced by consistently slightly-above-average stories. I am, however, pleased yet again that the mainstream is ensnared among the unusual, and we have yet another good fantasy from Ian Sales and, my favourite story from the collection, a great surreal piece from Tony Lovell.

As usual, the cover is excellent and the book looks and feels great.


Invisible Them by Matt Plass     6/10
A couple struggle with the reality of their soldier son's placement overseas. This flash story is familiar but the pervasive tone and strong writing elevate it. Plass is the author of "The Maginot Line" from The Maginot Line (TFD2) and "Tripe Soup and Spanish Wine" from Crying Just Like Anybody (TFD4).


The Coaster Boys by Cindy George     5/10
A man reminisces about his childhood group of roller coaster obsessed friends, and how, in their mid-twenties, one of the gang has contracted terminal cancer. This one did not grip me.


Something Unfinished by S. R. Mastrantone     6/10
Email correspondence between father and son, in which dad calmly recounts what led up to his recent separation from his wife, in that an early conversation between them, for years left unfinished, was now complete, and there was no longer anything to say to each other. Interesting idea with a nice ending to hint at ongoing family love. Mastrantone is also the other of "Just Kids," one of the stronger pieces in Crying Just Anybody (TFD4).


For Joy by Paul Lenehan     5/10
A flash fiction piece written in the second person on the anxieties of home ownership. Not my thing, but that's no fault of the author's.


The Patter of Tiny Feet by Tim Laye     6/10
Narrator recounts his six year-old self at his mother's hippy commune when he takes to an apparent skinhead mechanic who asserts dominance by taking it upon himself to evict the commune of its increasing rodent population. A good story, this one, with an agreeable relationship between disparate characters in a setting that makes them both outcasts. Unfortunately I did care for the epilogue that reveals the mechanic's secret method in disappearing the rats. I felt it was, in essence, lazy, with the older narrator happening upon someone somewhere who happens to tell him of the method. I feel the six year-old, in a flurry of irony, could have revealed it unknowingly, so long as the reader catches the gist of it.


The Menagerie of Sound by Robert Summersgill     6/10
The routine life of... unfortunately even that information would be a spoiler of a sort, since the story is built upon a process of reveal. Overall quite good, though the ending is obvious and thereby lacking, and the narrator's language a little too advanced. Similar to Greg Leunig's "Opposable Thumbs" that appeared this past spring in Shimmer 16.


Last Night by Andrew Jury     6/10
A couple hovering around their fiftieth spend a late night awake when their teenage son is at an all-night party. A good piece of characterization with an impressive female voice from a male author. Consistent with Jury's two other appearances in TFD anthologies: "Glenda" appeared in All These Little Worlds while "The Exocet" was published in The Maginot Line.


The System by Warwick Sprawson     6/10
A disgruntled roulette croupier has teamed up with a charming player to beat the game with the croupier's rare ability to target a section of the wheel and aim the ball. I've always liked stories about gambling, particularly dealing with roulette (Dostoevsky's The Gambler being at the forefront), and "The System" is a good, straightforward read. Clearly written, it focus alternately on the cheating system itself, and on the croupier who has bet everything on it. While the character is essentially two-dimensional, a kind of archetype in these stories, it does not detract from the narrative.


A Call to Arms by Tania Hershman     7/10
The winner of the flash fiction contest, and deservedly so. Even as a short piece of it's own right it packs a wallop, as we're given a glimpse into the life of an elderly man in a home, haunted by tragedy.


A Big Leap by Gavin Cameron     4/10
A boy converses with an artificial grasshopper. If there is something more to the story, then I've missed it.


The Last Men in the Moon by Ian Sales     6/10
A re-telling of the past forty-five years since the first landing on the moon. In this version, moon creatures attacked the American astronauts and waged war against a helpless Earth. Similar in structure and tone to Sales's haunting "Faith" from The Maginot Line, here we distantly follow a man from his eighth year as he witnesses the tragic lunar deaths of Edwin "Buzz" Aldrin and Neil Armstrong, throughout much of his life, and learn of humanity's plight at the hands of the moon people.


The Clever Skeleton by James Collett     6/10
Another piece of flash, this one featuring a man who believes he has since childhood been followed and watched over by a clever skeleton. A good and original read.


The Stairwell by Tony Lovell     8/10
In a valley commune, a man's fascination with a chatty female neighbour becomes troubling when he cannot believe she has recently spoken to a woman from the future. "The Stairwell" is a semi-surreal piece with elements of the post-apocalyptic, as we are presented with an isolated and crumbling outpost of a sort. The valley town is seemingly a residence for the elderly, where our two young leads are living a lonely existence, without evident purpose. While Jill finds herself living in the town due to familial circumstance, while striving (literally) toward the future, Colin is hooked on a partially vivid memory, and appears to have settled out of conscious choice. A challenging and rewarding read. I praise editor Rob Redman and TFD for recognizing the story's strength and sharing it with a wider audience.


SIMMO! by Damon King     5/10
Narrator dispels glowing account of a high school bully recently killed in a motorcycle accident. The final story in Because of What Happened is also the final featured flash fiction, and the story actually works well with the anthology title; arguably better than "SIMMO!" The story was interesting but unfortunately, due to the reader figuring out the narrator's motive early on, the flat-out explanation at the end comes across as anti-climactic. The story would have worked far better if his involvement was only hinted at, or better yet, made ambiguous. An awesome story, perhaps, if his involvement in other local deaths was just as ambiguous.

Thought the menagerie of sound was excellent!!