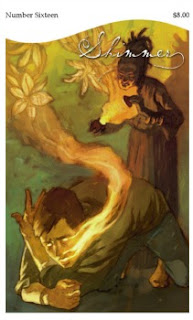 Number 16 presents us with thirteen shorter short stories. There are some unfortunately weak entries in this volume, mingling with some effective ones. Despite a few good tales, the consistent tone and consistent shortness of these stories makes for a somewhat average read, an entirely different experience from Shimmer #15. I think I would prefer the magazine if it included greater variety in style, tone and in the case of this issue, length. The shorter stories make for a choppy, interrupted read, and the similarity in tone unfortunately fails to bind. Something longer? Something wilder? I don't think it would harm.

I do like Shimmer quite a bit, but do feel it can be better than it is, a feeling emphasized when reading a weaker entry. A quote on the magazine's back cover and included on its webpage opines that the magazine features stories "built on fresh ideas or at least interesting twists on established ones," and that fantastical elements pervade each tale either overtly or via "the mere shimmer of possibility..." While true with most tales here, a few fall astray of this definition. There are a surprising number of stories that have no fantastical element, though they do imply fantasy and I suppose that is the "shimmer of possibility."

Side-note: Shimmer has some entertaining author and staff profiles and little photos in their backpages which I genuinely enjoy. In fact, it makes me feel badly when I write less favourably about a particular story. This review, hence, makes me feel badly three times over :( My favourites are those by Leunig, Ginoza, Gardner, Jablonsky and Bell. (Sounds like a law firm.)


Ordinary Souls by K. M. Szpara     6/10
A man continuously attempts to reunite with his lover via magic, ignoring the suspicions that the practice has some unwanted consequences. Somewhat reminiscent of Robert Silverberg's very good novella, "Born with the Dead." As the quote on the magazine's back and its website suggests, an old(ish) idea presented in a fresh form.


Goodbye Mildred by Charlie Bookout     4/10
Aged serial killer reminisces about serial killer wife, Mildred. Brief piece and not very good. Little actual characterization prevents me from caring, despite the obvious attempt at pathos. There are several problems with the narration: husband is too poetic at times to be believable, and tells the story second person to Mildred with such basic linear plot detail as though she has no idea what they'd done together. Contrived and certainly not what I would call shimmery, as per the previously stated quote.


Opposable Thumbs by Greg Leunig     7/10
"Opposable Thumbs" is a first person narrative that slowly reveals itself, and I think I was a little slow to catch on. Among the stronger stories, it follows the thoughts a person who... but that would be giving it away. Notions of identity and purpose from one in an unusual position.


Word and Flesh by Dennis Y. Ginoza     7/10
In a post-apocalyptic setting, a baby is sold to the local church and is transformed into the word made flesh. A powerful and captivating little piece that projects extreme religious fanaticism onto the future, on a society more concerned with preserving the word of God than preserving the outside world. My favourite story in the collection.


The Revelation of Morgan Stern by Christie Yant. 6/10
The letter-journal of a woman traversing the desert amid the apocalyptic presence of killer angels in order to find her loved one. A well written and interesting story that falls apart a little at the end. Unfortunately I couldn't take the explanation of those angels too seriously, non in such a non-metaphorical guise, which unfortunately weakens the piece.


The Binding of Memories by Cate Gardner     7/10
In a world where memories are collected and released after one's death, in order that they may retrieve them in the afterlife, a woman must contend with her aunts while two men are stealing the memories of others. Dreamy and unique, a good concept well delivered, and a story that well represents the shimmery quote from above.


The Death and Life of Bob by William Jablonsky     7/10
After having clinically died, Bob re-awakens and returns to work. At first wary and afraid, his colleagues soon accept him once they realize what a kind and refreshing soul he is. Things are complicated, however, when one person believes he is a zombie and that God hates zombies. A strong story, both amusing and effective. Our narrator is the collective we, the workplace colleagues. The story deals with people looking for a saviour and those for a sacrifice. Miracles are looked upon selfishly, as in how we can individually benefit rather than how we, as a society, can be made a better place. Prejudice abounds.


The Sky Whale by Rebecca Emanuelsen     5/10
Hitomi and her mother are headed to see family when the little girl sees a whale in the sky. This subtle, well written story deals with the loss of a parent during the recent devastating tsunami in Japan. A nice fragment of a story, where the whales, obviously seen in Hitomi's imagination as a coping method for the loss of her father. The story, technically, is not a fantasy, since the whales aren't really there.


Tasting of the Sea by A. C. Wise     4/10
A clockmaker builds hearts for sorrowful orphans. Nice prose, much of the time, but the abstract quality and lack of characterization makes for unremarkable reading.


Lighting of the Candles by Laura Hinkle     3/10
A sketch of a succubus named Unicorn who picks men up at bars. You might think she is a vampire, but the "you dream of me" nonsense alludes more to succubi. The myriad candles of the title seem to represent her numerous victims. Unfortunately the sketch is quite bland.


Gemini in the House of Mars by Nicole M. Taylor     5/10
A tale of twins, both seemingly evil, and the question of whether twin Lora was indeed killed by a cuckolded husband. Flows nicely but story-wise not too interesting. Taylor's Shimmer 15 entry, "The Undertaker's Son," is a superior story.


The Haunted Jalopy Races by M. Bennardo     6/10
Another story that borrows from recognizable fare to deliver something a little different. Two feuding ghosts of feuding boys who were killed during a race in their souped-up jalopies meet on the anniversary of their death to continue their rivalry, as witnessed by the gal they both had the hots for. A little predictable but some nice sentence shaping helps to elevate the story.


In Light of Recent Events I Have Reconsidered the Wisdom of Your Space Elevator by Helena Bell     7/10
An enjoyable ambiguous tale of apocalypse (?), innocence and imaginative story-telling, along with a dash of childhood cruelty and a great title. I also very much enjoyed author Bell's author profile.