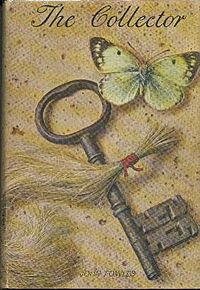 The Collector at Goodreads
Rating: 8/10

Despite being a great novel, I was slightly disappointed with John Fowles's The Collector. The novel tells the story of social outcast butterfly collector Frederick Clegg who, after having come into a considerable sum of money, kidnaps young art student Miranda Grey and keeps her captive in his basement. The first part of the book is told through Clegg's point of view, while the second is told through Miranda's, with a brief return to Clegg at the end.

The novel is great in its treatment of character and how it plays with the readers' sympathies. Clegg is an unusual kidnapper as he does nothing to hurt Miranda, but rather fawns over her, tolerates her every mood and does his best to please her, though with the exception of giving her her freedom. Despite being clearly disturbed and doing something terribly wrong, he is not "evil" the way in which we imagine kidnappers to be. During his narrative we grow to like Miranda, who is a spunky and intelligent twenty year-old. I was rooting for her to get the best of Clegg in their little game of outwitting each other, or rather of Miranda trying to outwit Clegg's obsessively careful game of warden. I found the first part fascinating because, though I was rooting for Miranda, it was all told through Clegg's point of view. 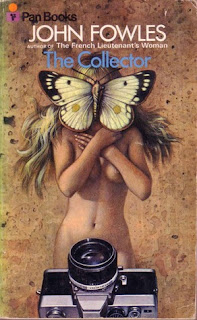 Jarring is the point of view shift half-way through, yet it is meant to be jarring (like this sentence). Now we are reading Miranda's journal, and our impression of her soon changes drastically. She is an unbelievably arrogant woman who thinks highly of herself and looks down without hesitation on others, including Clegg. Like Clegg she too is the collector of the title, as she collects and examines and catalogues the people around her. Of course there is no physical collecting on her part, though she has learned to keep herself captive amid her arrogant and narrow world view; there's no pinning of wings and keeping anything under glass, yet her sharp mind and sense of self allows her to pin people metaphorically, and examine them through the glass of her eyes. While I was still rooting for her to escape since Clegg's crime is greater and more accessible, she was no longer the spunky Miranda that we meet through Clegg's point of view.

My disappointment in the novel is fairly basic. I was so involved with Clegg's point of view that the switch to Miranda was not overly welcome. While I did get into Miranda's story, it lumbered on and became a little repetitive. Fowles makes his arguments clear and there was no need to have so many lengthy spiels in her diary, or so many scenes devoted to Miranda's playboy mentor G.P. Once I'd finished the novel, however, I found myself liking it more than when I was reading these sequences, at times wanting them to end quickly. With The Collector Fowles has given us a fascinating read incorporating two characters that are simultaneously likeable and despicable, and a finish which, though a little predictable for our time, is nonetheless quite disturbing.

THE COLLECTOR is one of those potential entries in Friday's "Forgotten" Books which would be Quite Arguable in its "forgotten" status, but it definitely fits in with the subtext of Books You Should Look At, or Look At Again.

Sorry I missed it on Friday...next Friday, and if you happen to do a more obscure book by next Friday...also, sorry to read of your first jerk commenter.

Thanks Todd. To be honest I thought about it, but didn't think The Collector is as forgotten as so many others. For one thing it hasn't been out of print yet. I do enjoy checking out the FFB articles & I'll certainly take part & let you know of the next, more obscure read.