Shock Totem #2: Curious Tales of the Macabre and Twisted, 2010 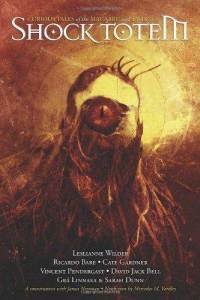 For my review of Shock Totem 1, please visit here.
Shock Totem's website can be accessed here.

Issue two of Shock Totem appeared a year following the impressive first issue. At eighty-two pages the book is slim, attractive and promising. I often prefer shorter periodicals as the lengthier issues seem to be stuffed with filler material, and with a total of fifty-seven pages of fiction, I opened the glossy cover waiting for a wallop of prose. Yet pages can be deceiving, and this slim publication contains nearly as many words as a hundred pager, but its small print and narrow margins conserves paper, and the nine stories, one article, introduction and end-notes, along with some review pages and an interview (with James Newman) are economical at $5.99 from the publisher's website.

Now, the first thing I'm naturally itching to do is compare issue two with the first, solid launch. Both are attractive, sporting great, easy on the eye cover art (by Hicham Haddaji), nice glassy binding and good quality paper. Internal improvements include better font which makes for easier reading, though the interior artwork is a little unclear and hence I pretty much ignored it. Content-wise the stories here are not as consistently strong as they were in issue one, though the concepts are more interesting. Darker-themed and modern ideas work well with the good mixture of dark fiction, brushes with postmodernism and much welcomed moments of absurdity and surrealism. The problem is that while there are a couple of really strong stories ("The Rat Burner," "Sweepers," "The Rainbow Serpent"), there are also a couple of obviously weaker ones which makes me think it was for the best that the editors waited a year to release issue two. Many of the stories don't quite work because their good ideas are not fully developed ("Pretty Little Ghouls," "Leave Me the Way I Was Found"), and the abundance of flash fiction is an unfortunate let-down.

At the same time it's great that the editors weren't daunted by tweaking the journal's overall content, and are offering us something different, as though we were reading independent anthologies rather than two volumes of the same periodical. Shock Totem deserves an audience and I recommend the purchase.


"The Rat Burner" by Ricardo Bare. 7/10
A young man sharing a run-down room with a prostitute earns a living as a "guide," taking people into the rat-infested alleys toward a black door that promises... something. Yet the guide knows that those willing to pass through the doors are set for a horrible journey. A good story, well written, with a nicely delineated rodent-filled neighbourhood. The characters, though not closely developed, work quite well, and I did sympathize with the leads. There is the occasional melodrama that is slightly distracting, particularly since most of the prose is straightforward. No explanation of what's lurking behind the black door is needed, so when it came I was a little disappointed. Minor comments on an otherwise strong opening story.


"Sole Survivor" by Kurt Newton. 5/10
Editor & publisher K. Allen Wood promises that Newton's stories in the first two issues will be the only back-to-back issues that will feature a story by the same author. Too early for a such a promise, as though he has done something wrong to allow an author to return. Personally I don't mind, so long as the story itself is worthy of inclusion. Wood selected well by going with "Thirty-Two Scenes from a Dead Hooker's Mouth" in Shock Totem #1, a far better story. "Sole Survivor" is a piece of flash, amusing I suppose (for those who like flash), about the eventual evolution of "reality television."


"Sweepers" by Leslianne Wilder. 7/10
Leslianne Wilder's first published story is flash-like in that it's short, yet it's thankfully long enough to avoid the trappings of flash, such as flat characters and a scenario that relies to heavily on a punchy ending. "Sweepers" is told through the point of view of a man trapped with others at the top of a metropolitan skyscraper while the world below is engulfed in a sort of biblical flood. The narrative progresses as the water continues to rise. A good story, though a little a little over-written near the end for my tastes. Nonetheless the writing is effective and the apocalyptic scene is well rendered; a nice change from those trendy apocalyptic zombies. Water is far creepier than the walking dead, especially since you can't thwart it with a shovel or a shot to the head.


"The Rainbow Serpent" by Vincent Pendergrast. 7/10
Gavin's girlfriend has recently left him and he's having a hard time coping. On his way single-mindedly to Wollongong with a gun in his jacket, the bus ride seems lengthy and a little unusual, the passengers overly friendly and the driver playing on a harmonica. The scenario is interspersed with brief segments of the Rainbow Serpent, an ancient creature learning to survive in a world overcrowded by humans. A strangely compelling read, I really enjoyed its oddities. The surreal quality grows, mixed well with Gavin's very real, unjustified anger toward his former girlfriend. Rather than a Lovecraftian form of ancient horror, the creature in "The Rainbow Serpent" is a reflection of our darker selves.


"Pretty Little Ghouls" by Cate Gardner. 5/10
Another flash story, serious in tone. A young woman is waiting to be executed. She is a danger to every living thing, since her touch brings instant death. Great idea and well written, but there just wasn't enough here for me to either fear or sympathize with our mutant.


"Messages from Valerie Polichar" by Grá Linnaea and Sarah Dunn. 6/10
A hot topic of fairly casual discussion has been the eventual fate of personal information on the internet once the current generation passes on. Who will monitor the billions of bits of info of an entire online society once that population has died off? In this piece an obsessive and superfluous woman gets so overcome with anxiety relating to this idea that her existence is focused around it. It's a tricky story since its lethargic tone and atmosphere works appropriately well, but threatens to disappoint since the protagonist is so unsympathetic. Needlessly self-absorbed, I didn't care for her silly anxieties, yet at the same time this obsessiveness with the irrelevant is a sad modern reality. Our "hero" is not wondering philosophically about fate or the value of one's existence, but instead develops a paranoid belief that some deep-seeded message can be found in the online ghosts of the dead. I sympathised for her husband, though he does lack a backbone.

Incidentally, in the end-notes the authors mention that Valerie Polichar is a real person, the editor of The Grasslimb Journal (San Diego), and they liken the story to Charlie Kaufman's blend of reality fantasy.


"Return from Dust" by Nick D. Bronson. 4/10
A soldier is killed in battle and awakens as a monstrous, unfeeling cyborg. My problem with this story was essentially that it was written in the first person. The tone throughout is cold and, well, cyborg-like, which makes sense, but the detached reading of the battle at the opening left me detached from the narrative. Moreover, a machine that recalls with detail its previous human emotion and is nonetheless so removed from that self that it can recall these details without any form of grieving, sense of loss, detachment, or any other natural connection. I couldn't even figure out its instinct to kill. Is that due to its detachment? But if so detached, why focus on the previous life with so much respectful attention to detail. Why even narrate the story if the cyborg's aim is to blindly march forward with destructive intent?


"Leave Me the Way I was Found" by Christian A. Dumais. 6/10
According to the author's story notes at the end of the issue, this one is a work of euphiction: "when you take a song, use the song title or a song lyric as the title of your story, and then create a fictional "cover" in less than a thousand words." I suppose euphiction is sub-genre of the short story sub-genre known as flash fiction. I'm glad the title is explained, though I'm not familiar with the song and the title does not highlight any aspect of the story for me. The story is about a two-minute, sixteen second video someone uploaded to YouTube, a video which quickly spread across the internet and causes all sorts of horrific mental disruptions in the brain. The idea is certainly not a new one (see John Carpenter's In the Mouth of Madness with a series of books, and his Cigarette Burns about a snuff film), however I do like the implied notion that a computer "virus" can re-write human brain patters, or programs if you will. Who says viruses can't spread across species? Pretty neat fiction, though it would be interesting to see the idea developed into an actual story.


"Upon My Return" by David Jack Bell. 4/10
Primarily made up of dialogue, a carnival manager is telling a police detective the unusual events surrounding the Miracle Worker act. The Miracle Worker is one Jesse Abrams (you know, like Jesus & Abraham) who has the ability to perform unusual illusions, such as, you know, turning water into wine. (I wonder why no one thought of throwing him a fish.) The weakest story in the collection, I found the dialogue to be unnatural, especially since an uneducated older carny speaks with grammatical fluidity and accuracy (excluding a few was/were slips) and in a seemingly unaffected tone. The irony here is obvious and when we learn of the horrible, frightening thing our fella Jesse Abrams has done to bring in the police, it is essentially underwhelming and I am left to think that these small town investigators have so little to do that they'd follow up on such unimpressive events.


And finally for the nonfiction, briefly. I appreciate the introduction and authors' end-notes (nicely titled "Howling through the Keyhole"), which to me are like a direct, though one-sided conversation between writer and reader. I appreciate story notes both as a writer and a reader as they can shed light or add some additional dimension to the work, sort of like those extras popular on DVDs. I merely skimmed the reviews, some of which appeared rushed, a little too informal for my taste, and sometimes more about the reviewer than the subject, though the overview on the series Fear Itself was informative; I caught three episodes and do, in my interest in genre anthologies, plan to view and review.

Finally there is a personal essay by Mercedes M. Yardley, whose short story "Murder for Beginners" appeared in Shock Totem #1. The essay, titled "Abominations: Hide the Sickness," deals with Yardley's own experiences working in a sexual deviancy ward. I'm a little wary of essays in periodicals as they tend to disappoint, but I found this one utterly compelling, though I would have preferred more organization and a slower, more informative pace. This is simply because I had so many questions, and honestly would have opted to read a lengthier version of the essay over the reviews. Hopefully Ms. Yardley has something along those lines in the works.

Posted by Casual Debris at 1:02 PM