I will not be providing an overview since this is one series that was well documented and researched. Wikipedia has summaries, cast notes and interesting production information. The David J. Schow and Jeffrey Franzen companion is exhaustive, so I'm given to understand. (I have not read it and do not have a copy, though will try to nab one.) 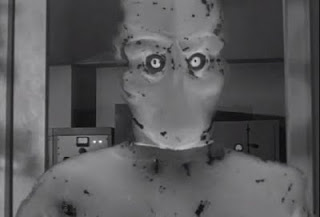 Owner of a small, local mainstream radio station, Alan Maxwell has been usurping the station's power after picking up an odd signal. By creating a series of radio waves that can emit three-dimensional images, he is able to give form to the originator of the broadcasts: an exploratory alien from another world. Like Maxwell, this being is taking part in the communication illegally, for while Max is acting against contracts with his sponsors by diminishing the station's broadcast range, the alien is communicating with Earth, an act forbidden to his people. These wise aliens are aware of Earth's destructive potential, yet this particular one believes in the benefits of sharing and exploration.

[Minor spoiler] Maxwell leaves the station to attend a social event in his honour, as does his brother, DJ Gene "Buddy" Maxwell. Replacing Gene for the evening is young and ambitious Eddie Phillips, who raises the power levels to the transmitter so he can be heard in the distant, foreign land of Canada (also inhabited by wise, exploratory aliens). Through his benevolent wish of sharing some good American music with Canadians, Phillips essentially overloads the electromagnetic field that is generating the alien's form and keeping it safely locked away, and the poor exploratory galaxy being is magica--I mean, scientifically transported Earth. It leaves the station and begins to wreak havoc on the small, unsuspecting town, but not through any form of maliciousness, rather because of his natural radiation. What will the poor, destructive humans do? (He should have materialized in Canada; the army is not as massive.) 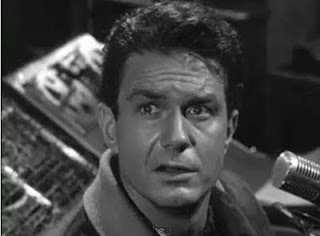 [Major spoiler] After wreaking some havoc, the police appear, and are soon followed by the military, who show up with their arsenal and start shooting, nearly Killing Maxwell's wife, Carol. The alien tells them to go home and "give thought to the mysteries of the universe," after which he de-materializes, but since the aliens do not experience death, his fate is unknown.

Written and directed by series creator Leslie Stevens, "The Galaxy Being" is a strong entry into the series. Stevens's background included stage and Broadway work, as well as scripting many teleplays for the popular Playhouse 90. It is superbly scripted, patiently detailing the relationship troubles between Maxwell and Carol, and appropriately sympathetic with Carol rather than the neglectful hero amateur scientist. Even minor characters are well developed, from Maxwell's brother to the young DJ, as is the alien creature. 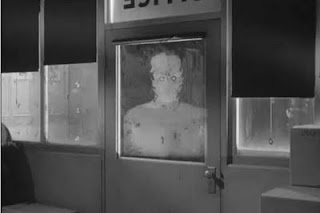 This episode is a great example of a successful hour-long anthology teleplay, showing patience, care in development and combining elements of family drama, competent 1963 science, and even some horror (the standoff a little reminiscent of many early sci-fi films, such as The Day the Earth Stood Still, but of course on a smaller scale). The episode's production budget of $213,000 (David J. Schow & Jeffrey Franzen, The Outer Limits: The Official Companion, as quoted on Wikipedia) was probably generous for a TV episode, and well spent, with varied sets, a strong cast and nice camera work. Except maybe for that scene when our wise alien is walking the streets and the camera acts as his eyes; the lights behind the camera cast some unfortunate shadows on the ground). My favourite scene is when the alien enters a pawn shop, perhaps looking for a souvenir, and curiously handling some objects, at one point peers through a pair of binoculars that magnify his radiation glow. Clever and humourous stuff.

The special effects are 1963, and yet in this case still effective, aided by the black and white and overall slick look of the episode. Cliff Robertson is great as Maxwell, and the always reliable Jacqueline Scott is superb as Carol (she did great work on two episodes of Planet of the Apes). Leslie Stevens provided the voice of the alien, and proves to be not only a fine writer and director, but a good voice performer.

THE OUTER LIMITS (ABC 1963-65) was the 'first' SF tv series that I loyally watched from start-to-finish when it originally aired on primetime network television.

The debut-pilot episode "The Galaxy Being" (16/09/1963) certainly successfully got this show off to a very good start and I have maintained very strong and fond recollections of it (especially the astounding looking extraterrestrial entity from Andromeda). Interestingly "The Galaxy Being" was negligently not included in the series' Summer rerun schedule.

Its exalted place in the distinguished annals of Television of the Fantastic is assured.