Tales from the Darkside Season Two: Episodes 9 to 16 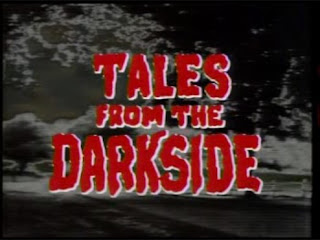 During the second third of season two, I discovered that I enjoy the more unusual, surreal and harder to define episodes. I've noticed that many viewers complain that there wasn't enough horror in the series, which is certainly true for something coming to us from the "darkside" (not to mention coming to us partly from George A. Romero), but some of the more unusual fantasies play out nicely, better than the straightforward horror. The comedic episodes are where the real horror lies, as these are usually prime examples of horrible television. 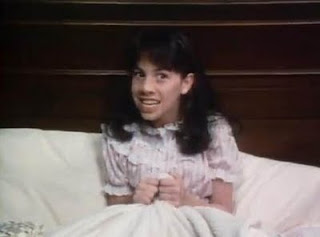 Nora and Jack Mills run a "Tea Shop" through which they swindle their customers with false tarot and crystal ball readings. They are recruited by a wealthy woman to perform an exorcism on her granddaughter. The episode consists of the couple's, though mostly Jack's, attempts at sending the possessing demon back to hell. Another weak attempt at humour, with obvious, exaggerated comedy, including a fair amount of slapstick and poor performances by the adults (I've have always found Phyllis Diller annoying, who was appropriately cast as the annoying lead in the poorly written and lamely executed Night Gallery episode "Pamela's Voice"). The unknown Tanya Fenmore as the granddaughter is of fun to watch, and her exaggerated Exorcist-inspired performance almost helps to save an otherwise bland episode.

"I'm thirty-one years old, and I don't have the faintest idea what's real." 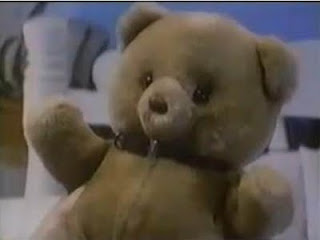 For her birthday Susie receives a little stuffed teddy bear from daddy. Strange thing is, daddy doesn't remember having picked it up. Well, since daddy is such a hopeless alcoholic, perhaps that's not so strange after all. Soon little accidents begin to happen around the house, like the vase of flowers getting knocked over and paw prints appearing on the wall. It wasn't Susie's doing of course, and without hesitation she names the culprit: "Teddy did it!" Now mommy isn't too happy with Susie not taking responsibility for her actions, and daddy is too drunk too care but keeps putting an end to mommy's temper tantrum, passive as he is. Well, mommy soon begins to suspect that Susie's imagination isn't as over-developed as she had thought, something the audience figured out long ago even though we've just met the little tyke. (Well, I suppose the opening Darkside titles were enough to tip us off.) Mommy is especially troubled when Teddy's eyes suddenly grow a bright red, and while she's stunned by terror, the poor viewer is stunned by the fact that effects crew couldn't come up with a better effect. Suddenly we cut from glowing ruby eyes to mommy tossing & turning in bed, so we're not too sure if those evil-looking eyes were real or part of a dream.

A clever episode that plays well with the generic demon doll storyline, but the ending really tosses the generic aspects aside by being both original and excellent. The finale highlights a number of family and responsibility themes that echo throughout the story. The more than dysfunctional mom & dad relationship is a great touch.


"Effect and Cause." (S2E11) First aired 8 December 1985. Directed by Mark Jean from an original script by Darkside regular Michael Kube-McDowell. Starring Susan Strasberg, Ben Marley, Judith-Marie Bergan and a bunch of objects... or not. 7/10

Free-spirit Kate Collins lives in her run-down home and insists on doing what she wants, rather than get a "real" job. One afternoon, friend David is visiting when the doorbell rings; two paramedics are at the door wondering where the victim is. David is baffled, so the paramedics, in their superior wisdom, clarify: the woman who fell down the stairs. A moment later, Kate falls down the stairs. Cool beginning, but it gets better.

Stuck at home with a broken leg, things begin to disappear, people appear at the door when unexpectedly needed, while other objects simply metamorphose right in front of Kate's eyes. She is fascinated, and while sister Janet, a devout skeptic, refuses to believe her, David is encouraging the neatness of these events. Yet while Kate does think they're neat, the sudden shifting of reality, she soon learns, can also be dangerous.

Whether different realities have crossed or the house itself is somehow out to get her, the reason objects disappear or change is not terribly clear. Yet it doesn't really matter. This neat episode (the best of the season so far) hearkens back to some of the better Twilight Zone episodes, such as "And When the Sky Was Opened" and "Mirror Image," though the disappearing objects in these little plays were usually human. Susan Strasberg does a great job as the free spirit, and while the script does at times fall into silliness territory, the storyline doesn't let up and makes for a good show. It helps too that the ending is quite strong, even a little disturbing. 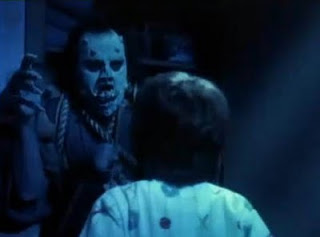 Wimpy little Timmy likes animals, real and stuffed, playing piano and being sung lullabies at bed-time. Stepdad Biff thinks the kid needs some manliness in his bones so tosses footballs at him, makes him drink beer and is all around unpleasant company. Biff doesn't even understand how Timmy could be afraid of monsters in his room, yet these creatures seem a little too real.

A good concept is badly executed. It appears the show was intended to be a light, tongue-in-cheek affair (it is the Christmas episode after all), with a cute kid and an a-hole who gets what he deserves. I suspect the monsters were supposed to be ambiguous, the audience wondering if it was all in his head or not until the final reveal, and yet it fails because it is too predictable. We've seen enough of these good kid/bad guy scenarios to know that, especially around the holiday season, good conquers its fears while bad is simply conquered. There are some amusing bits, some nice exaggeration, though I would've liked more over-the-top bedroom moments. And while the battle between Timmy and Biff rages, poor innocent mom is left at the end to suffer.

Another tale of the wimpy husband whose wife doesn't understand him and would rather he be a wealthier and more successful businessman or banker. In this one, the Omega male is amateur astronomer Englebert Ames who is about to gaze through his telescope to watch Halley's Comet as she is about to make her closest pass of the Earth. Well, in barges his less than lovely wife, eating cheap chocolate while her head is in curlers. (This archetypal image alone can alert the average American as to who is whom and how the episode will eventually end. Just recall last season's "The Word Processor of the Gods.") Wife tells hubby to get dressed since daddy has invited them to dinner, and poor mousy Englebert is stricken anxious as the once in seventy-five year event is coming to pass. Well, gazing through the scope he sees a pretty girl who is evidently standing beside a smoke machine. She tumbles into the room through the telescope and we soon learn she has been riding the comet with none other than Sir Edmund Halley himself since September 1910, her wedding day. Halley (Fritz Weaver, whose appearance in the season one episode "Inside the Closet" is far more memorable) has been chasing the lovely bride-to-be for three quarters of a century, and while he's quite frisky she's a little worn out. Well, the characters do get paired off and it's all supposed to be funny and heartwarming but is instead irritating. 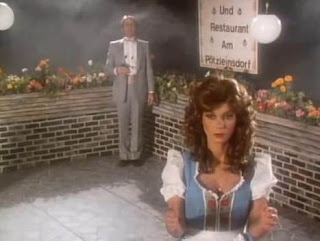 In this truly odd episode, New York Chamber Theatre director Andrea Caldwell (Carolyn Seymour, who also performed the female demon voice in Episode 9: "The Trouble with Mary Jane") has lost patience in her search for the play's author, the latest of a string of theatrical disappearances. An actress and an electrician have also gone missing. Soon Andrea finds herself in a surreal fantasy, being controlled by the theatre's janitor Otto Schrog (Lou Cutell) in the most obvious of macho roles. Here she stumbles upon actress Didi (Shannon Kriska) and electrician Joe D'Amico (Dawson Mays), discovering that all four of them are caught in Otto's strange fantasy.

This episode is surreal and unusual, yet while the humour often misses its mark I found myself enjoying the quirky little tale better than most straightforward episodes. Partly it is the quirkiness that I find appealing, the unusual story as well as the almost childish directing attempts to create a dreamlike atmosphere. And the costumes were pretty neat, from Andrea's cute Alps waitress uniform to D'Amico's hilarious shirtless farmer overalls. What I find most appealing, however, is the notion that it is the director who is unable to control the action; she can criticize the quality of the fantasy, the unoriginal scenarios and ridiculous dialogue, but as much as she tries to control the scene she can't. Of course we can relate this to life events, draw up a thesis on the notion of free will and the individual's inability to stage his own life. Moreover, we learn that Otto is a hopeless, sadly unsuccessful dreamer who once yearned for the romance of work at sea. We cannot control our destiny just as we cannot control those around us, and Andrea learns at the end that in her attempt to take control of Otto, not only to seek escape but to stake vengeance, she becomes a mere player in another's fantasy. As silly as the episode may be, it works on more levels than most other season two Darkside offerings. 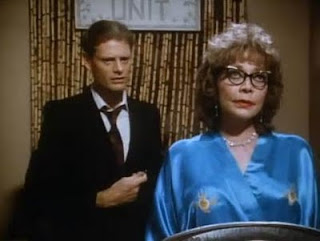 A young professional moves into the St. George, a nifty downtown building for a whopping $200 per month; a price, he says, that wouldn't even fetch a parking spot. The catch becomes all too obvious to the viewer early on, intentionally so, yet makes for good fun as we watch young Archie Fenton (Robert Rothman, blues singer Chicago Babe) exist in complete obliviousness to the fact that the building is alive. Building caretaker Madame Angler (veteran Marie Windsor in a great performance) is a treat to watch, as are handymen Al and Mac (Ben Frank and Robert Sutton), who are somewhat reminiscent of arrogant repairmen Spoor and Dowser of Terry Gilliam's brilliant 1985 film Brazil. Pale neighbour Helen Tanner (Patricia Pelham, or Lady Patricia Pelham-Clinton-Hope, then wife of actor Nick Mancuso) is also a nice addition, making for a fine set of well-rounded characters. It is the people who are truly creepy here and not the building itself, yet this too appears intentional and is a wise decision since emphasis on the building and the inherent silliness of it being organic has the potential of leaning to the unintentionally comedic. 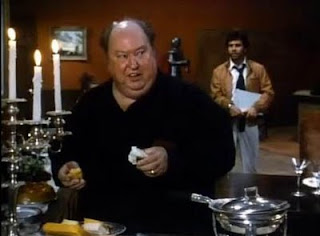 There is little else to comment other than the fact that John Harrison, the dude behind the episode "The Satanic Piano," has brought us another bad episode. Author wannabe Junior P. Harmon (Larry Manetti, most recognizable as Orville Wright in Magnum P.I.) responds to a radio ad and meets successful literary agent Alex Kellaway (an amusing Charles Knapp) who happens to use all forms of magic to promote his authors. Moreover, he expects his writers to perform spells as well, and insists that Harmon would most benefit from animal sacrifices. Occasionally amusing, the episode is mostly dull and utterly predictable. It doesn't help that Kate Charleson as editor and love interest Brenda Hardcastle is miscast.